When you’re in the eye of an emergency, it’s extraordinary what the human brain chooses to act on. All the things you’d think might count when shoring up to a potential life/death situation actually don’t. Something else takes over, and you just have to run with it: the questions can come later. In my fantasy assault, I assumed I’d get a brief but vivid flashback of my pitiful existence, exalting the very few who thought my time on Earth worthwhile. But last Saturday night, sat on the top deck of a replacement bus, reading a book and minding my own business, I was threatened by a murder of youths at knifepoint. The consequent rush of fear and adrenalin threw up something entirely unexpected:

I thought of one person. Not family, not a partner or child (I have neither), not even a favoured friend. But someone I needed to conjure up when there was a strong possibility my days could end before a minute was through. I thought about her own family; I thought about the children she would have that I’d never meet; I imagined a scenario wherein I could communicate, as in The Lovely Bones, benevolent guidance from the beyond that would keep her on track. All of this in what must have been approximately five seconds.

At exactly the same time, more practical stuff was doing the rounds. My blood, viscous and cadmium red against the cobalt blue seats, would surely take a while to shift? I saw the exasperated staff at the depot, kept back on my account, at once grateful for the hours yet bitterly resenting their time away from home. I considered the poor unfortunate who had decided to end his/her days on the bleak strip of track between Waterloo and Clapham Junction, forcing me into my own predicament. I even wondered if we might meet (seeing as our time of departure would have been similar) on the great staircase leading to the afterlife. And I wondered which fucker would judge my piss-stained jeans in the celestial cloakroom.

It was over in a blink. One of the eight talked the brandisher out of it and they shot off into the night, no doubt giving the incident barely a second’s thought. But for me, it was the first time my fragile state of being had been put in serious jeopardy, and it has left dark matter I could do without. After they’d gone, I realised I was wearing an absurd Hawaiian shirt I’d bought earlier for my brother’s 50th birthday party. And that really got to me. Because that’s how I would have been found, clad in pantomime costume as inappropriate to the moment as Joni Mitchell’s The Last Time I saw Richard set to Hard House Techno. Listen up if you have to.

At no point at all did I process the concept of survival. Make of that what you will.

I’ve never considered myself to be one of those consumer warriors. You know, the types that scour their cornflakes in the morning for evidence of weevils, and then send in a lengthy complaint to customer services, stating how their lives have been irreparably scarred by the ensuing trauma. However, it has come to light that a certain established blinds manufacturer (begins with V and ends with elux) is flatly denying a noted issue with their grey plastic runners which perish and fray the cords over time. Clearly a design flaw, IMHO. As I have three of the things, and the replacement kits (£35.66 each) comprise of 98% bits which still work perfectly well, I thought I might have a word.

Trouble is, I’m not very good at it. If I was my mother, I’d go all Penelope Keith down the phone and wait for them to cave in. But I’m not. So when they wheel out the stock argument that the problem is I’m using them too much, I simply agree and cough up. Of course I’m using them too much! I love my blinds to the point where I just can’t help myself. Up and down they go, up and down. Like a whore’s drawers. If you’re a night owl, you may have seen me from the street, overusing my blinds right through until dawn, particularly at weekends. In fact, I’m baffled my fingers haven’t worn down to the quick in direct proportion.

Now concerned that this compulsive blind usage could be a known ailment – perhaps somewhere on the spectrum of Aspergers or OCD – I trawl the net for medical clues and sure enough, I discover that NHS direct has a designated page, helpfully broken down into manageable sections. Bizarrely, excessive masturbation is down as one of the root causes, not something I’d be keen on admitting to in court if it ever came to it. Or to the nice Scottish lady so keen on taking my order for the three replacement kits. So it looks as if I’m stuck with it for the time being. I can only pray it doesn’t get any worse.

As with any form of addiction, there are drawbacks; however, I’m generally fine when in proximity to objects I can open and close. Sash windows are OK, as are those sliding metal grilles they have on coaches to store luggage behind. But get me out into the open and I’m crawling the walls (if there are any), desperately seeking something, anything, to block out the light and then let it back in again. I have suggested via email to V***x that they should consider a field kit for those in a similar predicament but, as is the way with these things, I haven’t yet heard back.

Apparently, the replacements will show up on 26th October. By which time I’ll either be in the Priory or lying spent in a pool of my own excess. There should be a law.

Every time it rains, snails across the land emerge from wherever it is they hang out when it’s dry and make a nighttime dash across our footpaths towards the road. Whatever’s there that lures them so is anyone’s guess, but they will not be deterred. To be honest, I’ve never quite understood the compulsion: if I carried a fragile apartment on my back and was impossibly slimy (don’t start…), I’d probably weigh up my chances before sliding off unto the breach. For that star-crossed mission will invariably culminate in mass slaughter on a scale unseen since WW1, something the molluscan powers that be seem to have turned a very blind eye to:

Col. Snail:  Thanks for coming in. Turns out not a lot of us are making it over to the road. Catastrophic percentages. Completely unacceptable.

Col. Snail:   Not good enough. It’s been chucking it down for days, how hard can it be? Now get back outside and show some bloody gumption!

Col. Snail:  I’m not interested in your chances. I just need you to get to the road. Am I making myself clear?

Maj. Snail:  Forgive me for asking, but none of us are entirely sure what the objective is.

Col. Snail:  Have you gone completely mad? The objective is the road! What exactly is it about the road that you don’t understand?

Maj. Snail:  Er…why we have go there?

Col. Snail:  Because there are rules, Major. And your job is to obey them and not waste my time with counterproductive remarks.

Maj. Snail:  Couldn’t we go in the day? At least then there’s a ghost of a chance we’ll be seen.

Col. Snail:  Don’t be ridiculous! We have always operated under the cover of darkness and I see no reason to alter that now. Any further questions?

Maj. Snail:  Yes, sir. What are we supposed to do when we reach it?

Col. Snail:  About-turn. And then come back.

Col. Snail:  ON THE ROAD!!! Whatever is the matter with you? Right, assemble the men. You leave in twenty minutes.

Col. Snail:  What if what isn’t there?

Col. Snail:  Of course it’s there! Where else do you think I’m sending you? Brigadoon?

Col. Snail:  Now get out of my sight!

When met with indefatigable logic such as this, is it any wonder the pavement pizza count is so high? And ask yourselves: have you ever seen a snail on the road? Seriously, ever? Thought not. 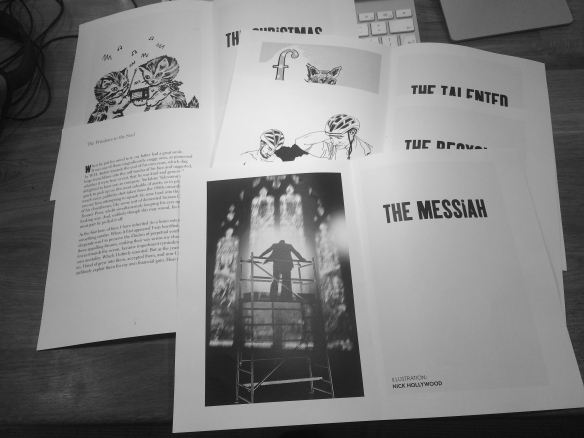 Artwork is in, got the ISBN, layout’s looking pretty swanky, paper type’s chosen and Amateur of Life and Death is now in the hands of the eagle-eyed Elinor who will hack out the unremitting repetition and cut it all down to about thirty words. And then I must be brave and send my first child off to the printers.

It’s a strange old feeling when you know you have to let go, but like my mother on my first day at school I’ll probably don a huge pair of Foster Grants and weep discreetly behind them. And then I’ll worry so. Will it be bullied by weightier tomes? Should I send little pots of jam for it to share with its chums? A couple of spare blankets now that autumn’s upon us? And how will I fill those endless, friendless evenings from now on? No one tells you this stuff.

I’m also a bit scared about the bill. I know we raised the hardback funds but now I’m getting all fussy about paper thickness and bleed. And, to be honest, I forgot about the VAT which is a pisser. But come what may, there will be a book in November and I do hope you will all buy a copy. Make that a few – Christmas is coming and I don’t want it to be just the goose that gets fat.

There will also be a launch on Friday 20th November at 6.30pm at the very same venue I mentioned in Update 13. It will be busy and entry will be by RSVP invites only, but if you’d like to come and listen to me butcher my own work as you drink the good drink, or enjoy some of the art from the book as you take in a bit of live moosik, get in touch. Usual channels. I’ll sign a few books if you want, and if you pay a bit more I won’t. Every little helps…