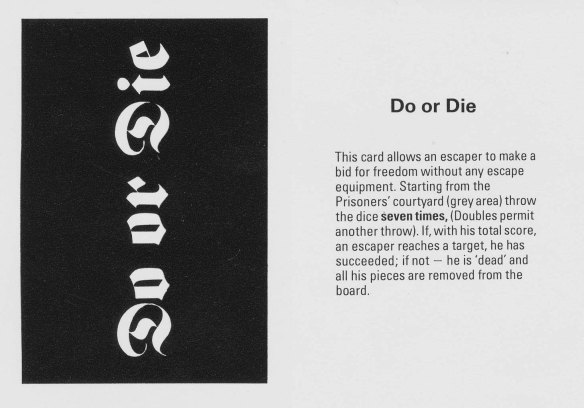 Some of you older readers may remember the significance of the above. Taken from the board game Escape From Colditz, the Do or Die card, if you were lucky enough to have one in your hand and reckless enough to use it, gave you an all or nothing bid for freedom. If your dice held true, you could be out within seven rolls. If they did not, you were ‘eliminated’ and removed from the game.

On Friday 17th July, I roll my first dice. Everything I have worked on for nearly four years hangs on the result. Everything. If enough funds are raised for Amateur of Life and Death, it could potentially change my life. If they are not, it’s back to the grindstone. Last night I had a dream (no, not one of those) which told me to run the campaign using the escape cards from the game as markers for the updates. Seven updates, one at the start and then every five days, thirty days in total. So that’s what I’ll do. Never question a dream, just do what it says.

For those of you don’t do the Farcebook/Twitter, there will be a launch party in Herne Hill, London SE24 on Friday 17th July from 7.30pm. There will be readings, played audio and video, a fancy banner, giveaway badges and postcards and, of course, some booze’n’grub. Everyone is welcome. If you fancy popping by, could you let me know as I’ve no idea how many to cater for as of yet. If the funds are raised, I’ll throw another one. Hell, why not?

Finally, and crucially, I’m going to ask a favour of you. If you like what you’ve been reading/listening to here, could you like and share all the posts that come through for the next five weeks? Makes all the difference and it gets the word out to people who don’t yet know. And God knows, I need every last one of you right now. Better still, if you could subscribe (that little button on the right of the main page that says Come on!), again it would be massively helpful.

My apologies for being pushy, but when you play the Do or Die card, there’s no turning back. Them’s the rules x